Computerised looms that can produce 3D fabrics could lead to a new type of “pliable architecture”, the designer said.

“Textile is the lightest and strongest construct that you can have,” she said. “So with this, we could replace concrete and cement in the building industry.” 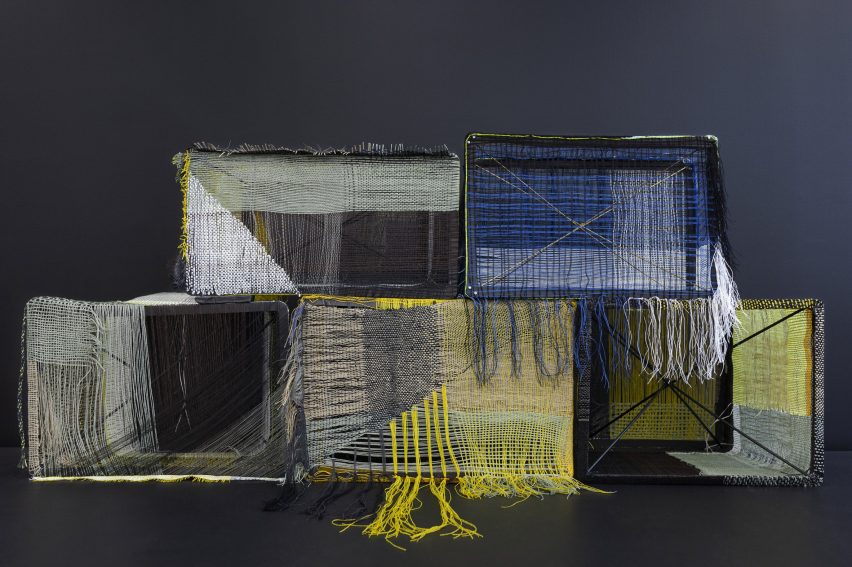 Jongerius has previously created a series of 3D-woven bricks

3D weaving is in its infancy but it has already been used to create medical implants from polyester and to form aircraft bodies from carbon fibres.

But the technology could be scaled up to create buildings, the designer argued.

Jongerius made the comments during a live Dezeen talk to mark the opening of her Woven Cosmos exhibition at Berlin’s Gropius Bau.

In the talk, broadcast live from the museum, the designer shared an early preview of the show and discussed how she has used high-tech weaving applications. 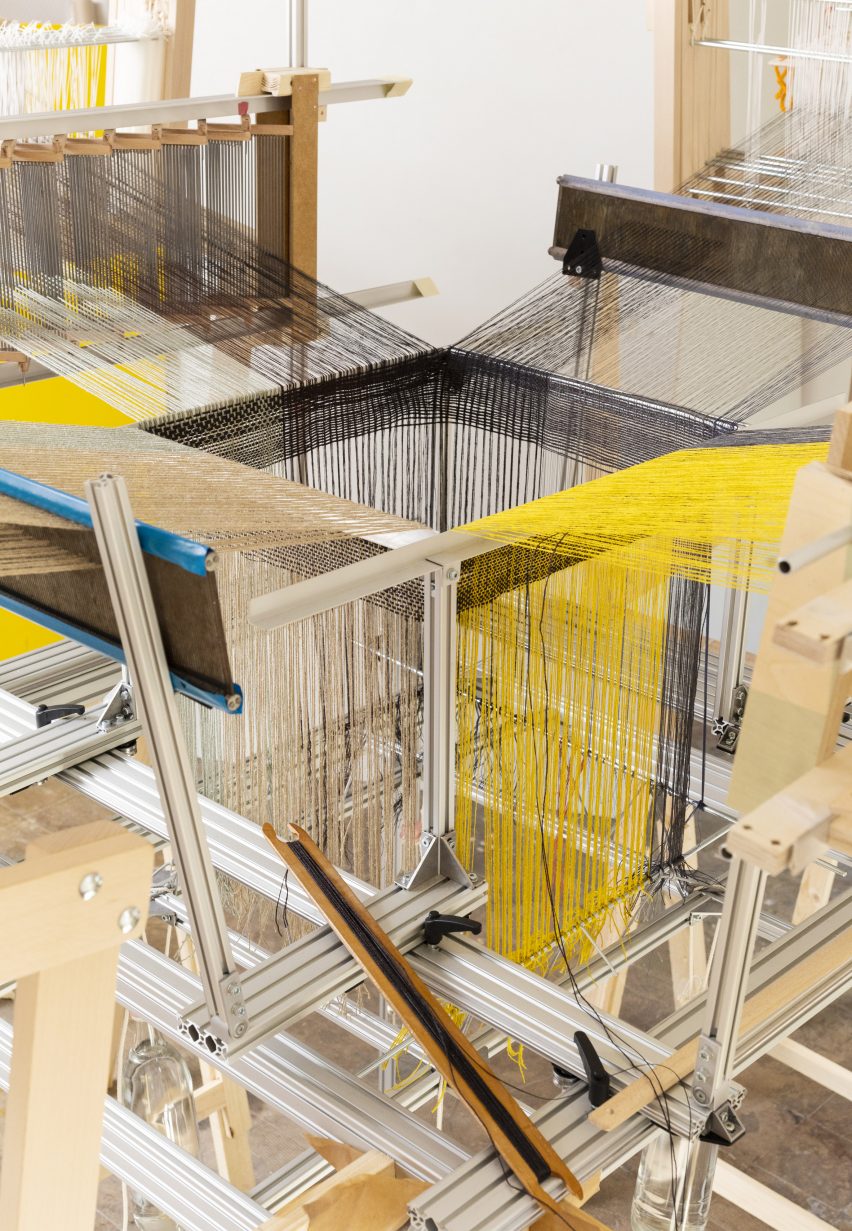 They were woven using a multiaxial loom

3D weaving in particular, she argued, could be used to interlace building materials with photovoltaic solar yarns and create architecture that responds to the weather.

The technology, also known as multiaxial weaving, relies on advanced looms that allow fabric to be woven along multiple different axes as well as creating 2D textiles that can then be unfolded into 3D objects.

“It’s the future,” said Jongerius. “You could make facades or solar panels, now that we know how this technique works.”

“You can have balconies that pop up when the sun shines”

As part of the Woven Cosmos exhibition, Jongerius is showcasing a number of experimental prototypes for what this kind of construction could look like in the form of her Pliable Architecture series.

Created over two years, the series consists of fabric modules that are woven as flat units using an advanced digital jacquard machine but can be unfolded into multi-dimensional pop-up structures, achieving a large volume with minimal use of material. 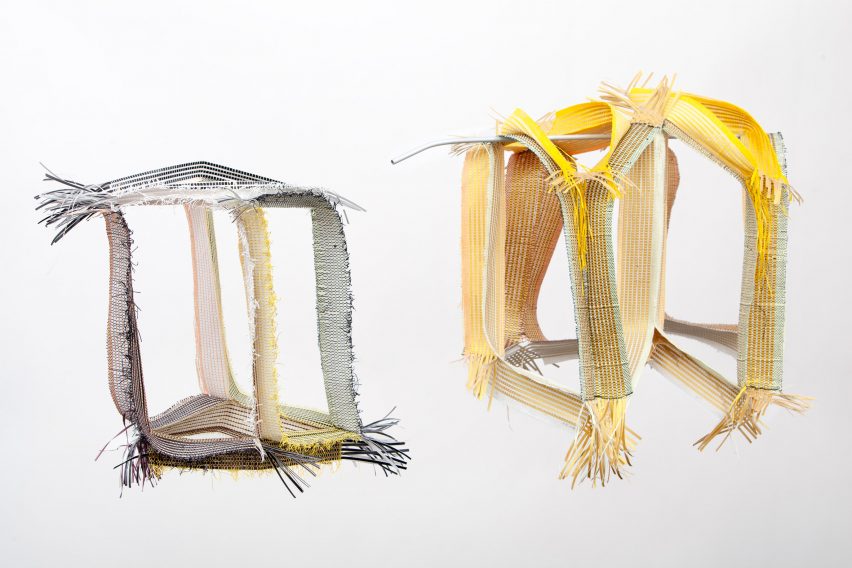 Several of these are interwoven with conductive yarn and laminated strips of photovoltaic cells, in a technique that Jongerius said could one day be used to create new kinds of solar farms.

“With solar yarns, we could replace our solar panels that are now on our roofs or in fields,” she said. “You could have structures and sculptures instead of looking at technology.”

Jongerius revealed that she is working with university researchers to use the electricity generated by the solar fibres to transform the two-dimensional fabric modules into 3D forms. 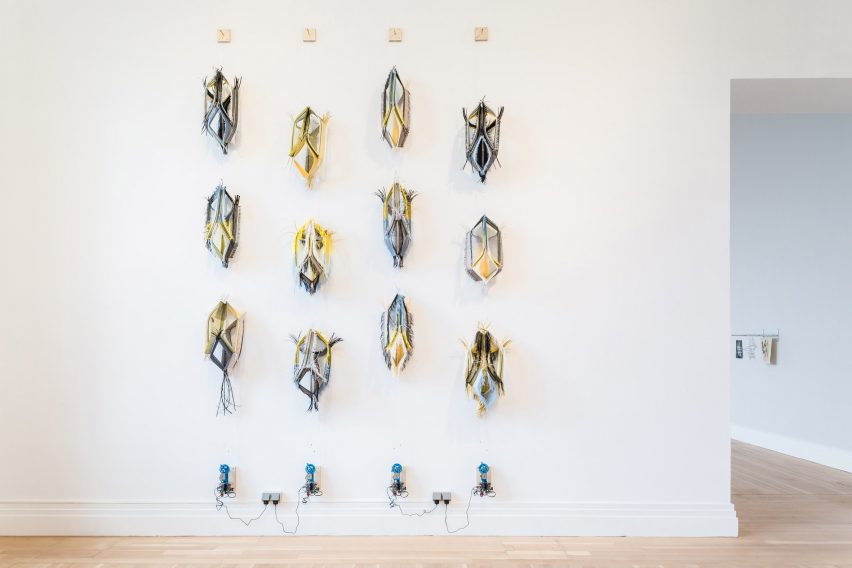 The series is exhibited at the Gropius Bau

She predicts that this kind of technology could be scaled up to create solar-powered, carbon-fibre balconies that automatically unfurl on sunny days.

“You can have balconies that pop up when the sun shines or platforms to have drones arriving,” the designer explained.

According to Jongerius, 3D weaving is more versatile than 3D knitting, which has proven popular among footwear and furniture manufacturers in recent years.

“Knitting is not so strong and it’s quite a simple technique,” she said.

“It’s one loop over another loop, so it’s restricted.”

“In weaving, you have many more possibilities,” she added. “In a way, weaving is an empty vehicle. So you have one [yarn] up, one down and then you can add all kinds of functions like absorbing moisture or sound, antibacterial functions, solar cells.”

Jongerius first began working with multiaxial weaving for her 2019 exhibition at Lafayette Anticipations in Paris. Here, she created woven bricks using a special multiaxial loom, developed with the team at her studio Jongeriuslab by hacking and combining four separate handlooms.

“I really wanted to build a loom because a machine for this way of working does not exist,” she said. “So it’s more a vehicle that can raise questions, a research loom.”

In contrast to the automated 3D weaving machine created by Nigerian American designer Oluwaseyi Sosanya, Jongerius’s version is entirely operated by hand in the hope of offering more space for experimentation.

Called Seamless Loom, the machine will be exhibited as part of Woven Cosmos alongside a number of interactive installations that will take form over the course of the exhibition, with members of the Jongeriuslab team coming in to work on the looms every day. 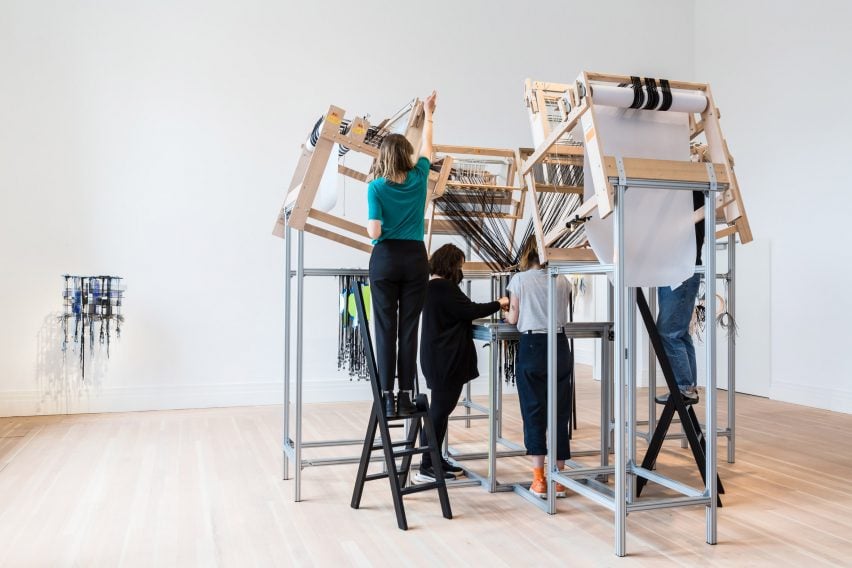 The Seamless Loom allows fabric to be woven along multiple axes

According to Jongarius, the exhibition also offers a space to consider the healing possibilities of weaving as well as suggesting ways that the textile industry can become more sustainable.

“It’s the most polluting industry and the labour conditions in low-wage countries are really terrible,” she said. “So I wanted to address this sustainability topic.”

The Woven Cosmos exhibition can be explored digitally via the Gropius Bau website and will be open for visitors as soon as coronavirus restrictions allow. See Dezeen Events Guide for an up-to-date list of architecture and design events taking place around the world.